At last, Hell Week is over.    When I last posted, I mentioned some of the east fence line that was completely down—overgrown with cat’s claw vines and attacked in several places by falling tree limbs.  Worked at clearing the fence line for 4 days.  Fortunately, my friend the pet gifter came out and was a great help with that chore.  It enabled us to work both sides at once, which was really the only practical way of doing it.  We put in 16 new t-posts, and eventually found ourselves all the way down to where we had stopped patching the east side after the great escape back in March.  We got the field netting tied back up, but I still need to splice all the broken barbed wire, or if it proves to be too brittle, replace it completely.  I suspect that all together we now have about 1/3 of that east line cleared—good progress towards an entirely new fence in the not too distant future.

We took the weekend to do a little flea marketing—nice one near Stevensville that is only opened the 2nd and 4th weekends each month, and really draws the vendors, plus a lot of little shops in Comanche,  Brownwood, and Santa Anna.  We really made the rounds, and it helped DL get over all that work during the previous few days.  (I hope)  Yesterday, DL hit the road again, and with the help of another friend, I finally got the rear wheels off of my F-450.  The truck is 13 years old now, but only has 60k miles on it, and I don’t remember ever pulling the inner wheels in all that time, and the outer where not much fun either.  Success was had by dragging the oxyacetylene rig out, and using a hydraulic jack between the frame and inside edge of the rims while heating the wheels up pretty good.  Gonna put 4 new tires on the ground since I need to be doing some hauling from LH to the Hunker Down, and the little Nissan PU just won’t cut it.

Woke up this morning (Tuesday) to a steady mist/drizzle, and since I had bought some fall vegetable sets yesterday while in town, I decided it would be a good day to work in the garden.  Managed to get 4 planting beds cultivated and composted, and then the drizzle turned into a nice light rain.  After getting as wet as I cared to get, I came on into the house and dried off with a hot shower.  Now the clouds are lifting, so once I finish this, I’ll slip into the wet and muddy jeans and see what I can get into the ground.  —– WOW–lucky timing.  I just finished putting in the last broccoli set when another nice shower passed by

Missy when she first showed up here: 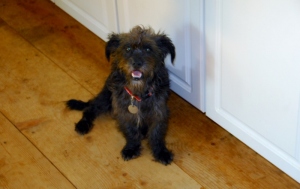 and just for fun–the young goat I call “tricky”

out on a limb 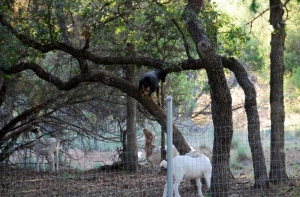