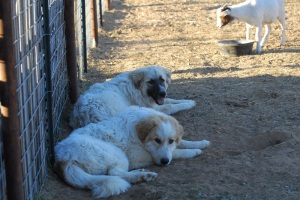 Ernie, and his brother Bert are what is known as LGDs–large guard dogs.These two are Anatolian/Akbash mix with a little Pyrenees thrown in.  They are still pups having celebrated their first birthday on June 7th.  I suspect that they are 125lbs. + and will probably top out over 150.  They are the most amazing dogs I’ve ever been around–raised with goats, they think they are goats, and they are very protective of their herd mates so to speak.  I think they are aware of everything that happens on the ranch, keep the perimeter patrolled, and I doubt that anything or anyone could get between them and the goats unless I’m with the “interloper”  Don’t think that I would want to keep goats on pasture without them, now that I’ve been able to watch them operate.